Big Bugs is a satirical urban spectacle about the beetles who grow to enormous proportions because of the consumption of junk food and breathtaking amounts of food waste being available to them on the streets of big cities.

Four huge lifelike beetles show up in the middle of the city. The ‘Kafkaesque’ parade, consisting of a giant Cockroach; an enormous Lady-bug; a Stag beetle and a Jewel beetle go on rampage through the streets, causing excitement and ‘mass-hysteria’ amongst the public. They are accompanied by The Forester who is trying to get a grip on the situation. “Don’t panic! We have everything under control!” he shouts while the astonished crowd shrink back screaming.

The act, which starts as electrifying chaos-generating happening among the audience, culminates in a hilarious circle-performance on a city-square.

The story gets a satirical dimension through the character of The Forester (a spokesman of the environmental organisation G.R.E.E.N.) as he reveals a special bugs fitness/lifestyle program which will reduce them back to normal size. A solution to the giant-beetles-issue which is causing a widespread panic and unrest amongst the population in and around big cities.

Big Bugs Show is created by theatre-makers and artists Iva & Petar Mandick, and performed by their group Mr.Image Theatre.

Continually exploring new dimensions in visual/mask theatre, in 2012 Iva & Petar launched Big Bugs Show, a ‘Kafkaesque’ crawling spectacle featuring four giant lifelike beetles. The spectacle is set on streets, right amongst the audience. By taking some popular themes, such as ‘junk food’ and ‘food waste’ – and turning them into a form of a satirical urban legend, the authors create original contemporary street theatre that communicates with broad audience.

“We believe that street theatre should not be merely ‘entertainment’. It should be in the same time engaging, it should reflect current matters and carry a message or comment. We see street theatre as an opportunity to create a form of true LIVING THEATRE,
a ‘happening-like’, direct theatre.”

See the most popular videos! 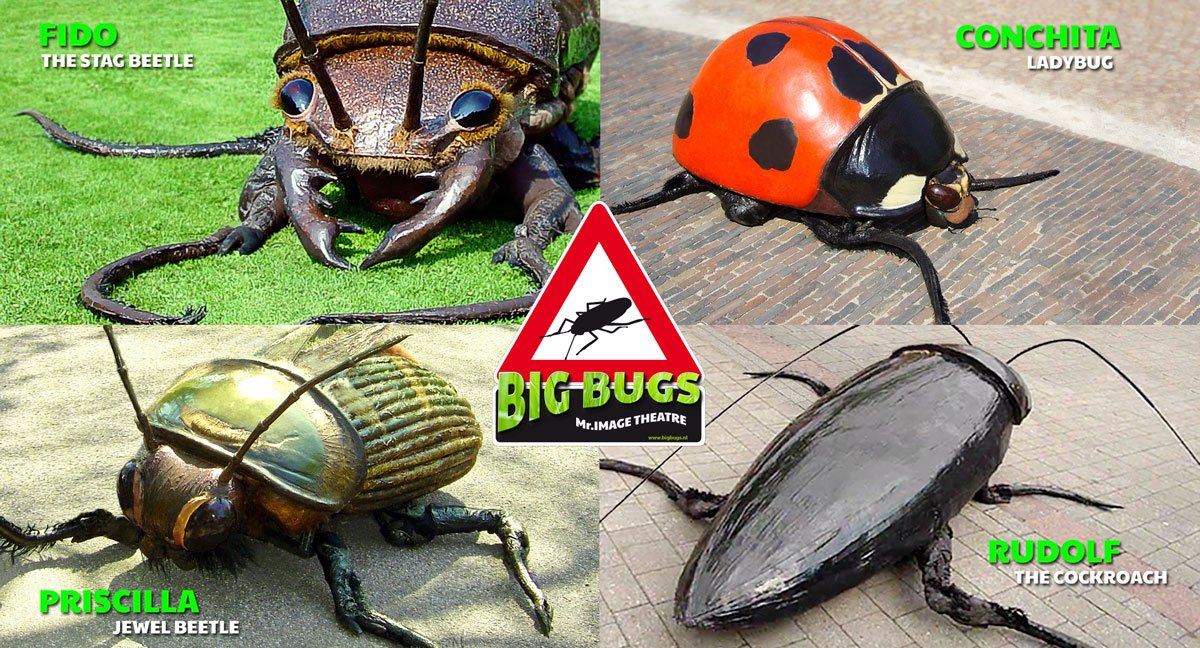 Get to know each Big Bug individually

For bookings and more information you can contact us by phone +31 20 6184917, by email info(at)bigbugs.nl, or fill in the contact form below. We’ll get in touch with you as soon as possible!

How long is the performance?

At festivals we usually play 2 shows of 40 minutes a day or 3 shows of ca 30 minutes a day.
Anyhow, the number of shows is readily adaptable to the concept and program of the festival and can be negotiated.

How big is the cast?

What languages do you use in the performance?

The show is primarily visual, however, The Forester is a speaking character. The show can be performed in:

Can you describe Big Bugs performance? What is happening?

Where to plan BigBugs performance?

BIG BUGS performance should be planned at the spot where the most audience is expected (for example, at the main city square).
The show can also be planned at different locations during 1 day but there has to be enough time between the shows for build-up, break-down and transfer.

Regarding terrain: thanks to our ‘all-terrain’ wheels, we can move on (almost) any terrain, inclusive grass.

For which occasions is the show suitable?

Big Bugs are very much at home at street theatre festivals; City Festivals; Puppet festivals; Music/dance festivals; Park Festivals; Environmental events.
You will spot them in the middle of a city square; around a castle; in a busy shopping mall, at the zoo…

Is there a limitation to the size of the audience?

The show works great both at small and large-scale festivals & events. The show is suitable for a large audience. It can be watched by up to 1000+ spectators.

What is the audience profile / age group?

What are the main technical requirements?

For all technical requirements please see our Rider.
You can download a PDF file here.

Can I book the show outside of Europe?

Yes, of course! For long-distance, oversees gigs, we can travel by plane and ship all our costumes and requisites as cargo.

How can I book the show?

You can contact us by telephone, by e-mail or by filling-in the contact form. We’ll get back to you asap and provide you with all the information.